Paris-Brest-Paris: You Know You Wanna Go

The Paris-Brest-Paris 1200km grand randonnée is the premier event in the world of randonneuring. The challenge is to ride your bicycle from Paris to Brest on the English Channel coast and back again in 90 hours or less. It was first run in 1891, and is now held every four years. This year’s edition starts in Paris on August 16, and it’s time to start planning! Seattle International Randonneurs has been well represented at PBP since 1995, and we hope to have great participation again this year. It’s a riding and cultural experience you’ll remember forever.

We will be holding a Paris-Brest-Paris informational meeting on January 25, 2015 at the new offices of Cascade Bicycle Club in northeast Seattle in Magnuson Park. The meeting will be of interest to anciens / anciennes, as well as to those who have never ridden this event but are interested in learning more. In addition to reviewing qualification, registration and logistics, we will also offer insights from PBP veterans on training and equipment, and what to expect on the ride itself.

We also hope to have information on our new SIR club jerseys and reflective vests, including a special PBP edition, which can be ordered online.

There will be light refreshments, so you will have the opportunity to share stories about past cycling exploits with new and old friends, and to discuss riding plans for the year ahead. Even if you are not planning on going to Paris this summer, it should be a good get-together.

Where: Cascade Bicycle Club Offices, 7787 62nd Avenue NE, Seattle, WA 98815. The offices are located in the Magnuson Park complex off Sand Point Way in northeast Seattle. Turn off Sand Point Way into Magnuson Park at NE 74th Street/NOAA Blvd.; then take your first left; and then take your first slight left onto 62nd Avenue NE. The offices are down the street on your left.

Comments Off on Paris-Brest-Paris: You Know You Wanna Go

UPDATE 1/14/15: Ordering information is on the main SIR site. The ordering deadline is February 22, 2015. We will have sample jersey, vest, and wind jacket sizes and styles to try on at the PBP information meeting on January 25 at about 4-4:30 PM.

In a world where no road is too long, no alplet too tall, and no café too far, they are the Seattle Randonneurs…
[Cut to a string of blue shirts up the road, pedaling towards the horizon, Rainier clear in the golden light of the setting sun.]
From Robert Higdon, PBP ancien and designer extraordinaire, your brevet season is about to get a whole lot better looking:

New reflective gear is coming soon to SIR. Here is a preview of the wind jacket and vest:

These meet the PBP reflectivity requirements as well as RUSA guidelines for permanent and brevet riders. Will also be available in pink or yellow. Jacket has no pocket. Vest has one big pocket. Pony not included.

Comments Off on Reflective Vests and Jackets

In 2014, four SIR members completed an unofficial challenge that they’d started twelve months earlier to honor SIR rider Donald Boothby, who passed away in 2012.  The four finishers are Keith Moore, Mick Walsh, Hugh Kimball, and Joe Llona. Along with Don’s wife Mimi and challenge-instigator Narayan Krishnamoorthy, the finishers discussed the challenge with George Thomas on his excellent podcast Over the Top Cycling. You should go listen to it, I’ll wait right here. OK, welcome back. Now scroll on down to read some Q&A with Keith, Mick, and Hugh who were kind enough to talk to me about the challenge.

What is the Boothby Challenge and why did you decide to attempt it?

Keith Moore: Don had the crazy (crazy!!) idea to do a 300K R-12; he started his own personal challenge in 2011. About half way through the year, he was diagnosed with cancer. Treatment and surgery didn’t completely keep him off the bike, but it prevented him from riding long distances. Don died the following year. I guess you could say that we finished what Don started. We weren’t trying to raise money or awareness, we just rode to honor the memory of a friend.

Don died before I became active in SIR. That said, given the stories I’ve heard from other riders about his sense of humor, his love of riding (and his love of pie!), I know he & I would have been friends.

As to the “why” part, that’s more complicated, and I’m not sure I have a definitive answer. I like a good challenge, and even though I had not yet completed a “normal” R-12, this seemed like it would be “fun” (for some definition of the word).

Mick Walsh:   It’s an R-12 with 300k or greater ride every month instead of 200k.  Why? Because it sounded like a great way to honor the memory of a wonderful man.

I don’t think I ever rode with Don, I’m a newbie to Randonneuring, just hearing all the support he was getting during his illness showed me how well liked he was.

A number of my 300’s are for riding Seattle to Portland or the reverse. I have a new grandson in Portland (Dec 1, 2013). So it’s an excuse to ride there and back. For example to get October and November done I rode to Portland on 29 October and returned on 1 November.

Unfortunately, I did not know Don. But my son Todd and his son Josiah played in the Garfield High School Orchestra. Todd played a trombone and Josiah the French horn. It was not until Don’s memorial party that I connected the dots. It was really sad that I had not done so earlier when I could have ridden with Don.

What is the best moment you remember from the challenge? The worst?

Keith: Maybe it’s the randonesia, but I can think of mostly great moments. The only bad moment I can think of is missing the ferry for the November 300K [on 11/8, which Mick and company finished in 11hours].

As far as great moments, there are many, including:

By far the “strangest” moment occurred 02/15 when a few of us rode the MI-3 300K. The weather was horrible — windy, rainy, cold, dark. Everything you don’t want in a 300K.  We rolled into Carnation just after 7pm and stopped at the IGA grocery store for hot food and a little rest for the final 28 mile push back to Mercer Island. Inside the store we were accosted by a very drunk woman. She tried to warn us to stay off the roads, mostly because of drunk drivers (people such as herself). I’ll never forget her words: “If you guys were my kids, I’d kick your asses!”

Mick:  I think the Race to the Border 400k preride was the best memory, we had a great group and went so fast! Though the November 300 in 11 hrs was special too 🙂

Feburary and October rides ended up in vicious wind storms and torrential rain, they were ugly.

Hugh: One of my best moments was when Ken Ward accompanied me to Portland. And one of the worst was riding by myself toward Portland along highway 30 when it was 38 degrees and raining.

Before the December ride, six of us met for breakfast at the Twin Eagles Cafe in Snohomish. As I was paying my bill the waitress asked about our ride. I told her a little about Don, and explained the Don Boothby Challenge. I told her we were riding for Don. She told me that the cafe’s owner, Sue, had died from cancer only two days earlier. She asked if we could ride for Sue as well. Of course we could.

I’d do more research on downtown Seattle parking before trying to catch an early AM ferry.

Other than missing the ferry for the [11/8] November 300K, everything else went as smoothly as one could hope for. My bike performed flawlessly (modulo the occasional flat), I kept on top of my nutrition (no bonking), etc.

Um, I would do the first 2 and the last 3 in warmer climates. No, riding in the miserable NW weather is what makes this a worthy challenge.

Hugh: I would do it again but it would be nice to do more riding with others- not so much solo. That being said I am retired and can often ride depending on the weather. Not many riders have that flexibility. I admire riders with full time jobs that did the BC.

“There are some crazy bicyclists who like riding long distances who decided to try my father’s bike challenge: at least one 300 kilometer ride (186.4 miles!) per month for a year. Here’s some pie to celebrate the people who took this challenge on!” — Josiah Boothby

Photos from the Challenge:

Keith: This is a self portrait I took when you and I were at the Shell station in Sumner, WA — our last control before the finish of the November 300K [11/15]. I think my face exactly expresses my feelings at that point in the ride:

Mick:  [At the Barlow Pass control on the Spring 400K] with Adam Morley, who, like me just completed his first R-12

Hugh: “Everyone is getting older, but just because you’ve gotten older doesn’t mean you can’t do things.” — Derek Jeter 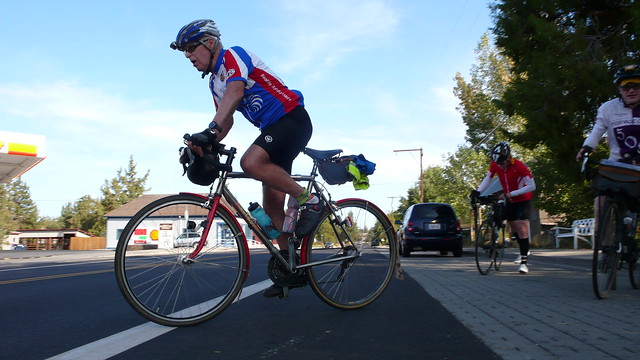 Hugh on the Volcanic Arc 1000K – Photo by the editor